Why LBC? The Stanley Center’s Commitment to Climate Change Solutions

In 2019, the Stanley Center for Peace and Security partnered with Neumann Monson and Graham Construction to design and build their new headquarters in Muscatine, Iowa. The new facility will adhere to the standards of the Living Building Challenge (LBC), the most rigorous measure for sustainable design.

Pursuing the LBC represents the Stanley Center’s commitment to its global, peace-driven mission. Since 1956, the Center has brought together members of the global community to address humanity’s most pressing issues, including climate change. When completed, the new facility will embody the Center’s values and set an example for sustainable design.

A History of Climate Change Action

Since its early days, the Stanley Center understood the role environmental protection plays in maintaining global peace and security. As far back as 1979, Stanley Center founder Max Stanley wrote about the man-made threats to earth and called on all nations to take “bold steps” to protect the health of the planet. In 2013, the Stanley Center began reevaluating its focus to align with pressing contemporary issues and made climate change one of its three focus areas.

Capping the earth’s temperature increase at 1.5 degrees Celsius was an ambitious goal. According to Stanley Center President and CEO Keith Porter, the goal requires “transformational change, not just change on the margins.” All participating countries would have to make a complete shift to renewable energy by the second half of the 21st century, transforming the global economy.

This transition would impact everyone across the globe, particularly vulnerable communities in poorer countries and those whose livelihoods depend on the fossil fuel industry. For the Stanley Center, mitigating climate change meant fulfilling a moral imperative to protect communities most at risk.

Today, the Stanley Center champions collective climate change action by facilitating collaboration among national governments, subnational governments, and actors in civil society and the private sector. Through policy change, they work to reduce our reliance on fossil fuels and accelerate the use of renewable alternatives. Additionally, they find innovative solutions beyond policy by working with colleagues in migration, global public health, biodiversity, and international security.

These efforts have facilitated interactions between climate activists and the agriculture and forestry industries. Most importantly, they aim to maintain global peace as we transition to renewable energy. According to Porter, the Center believes in a “just transition”—keeping people at the center of climate change solutions. 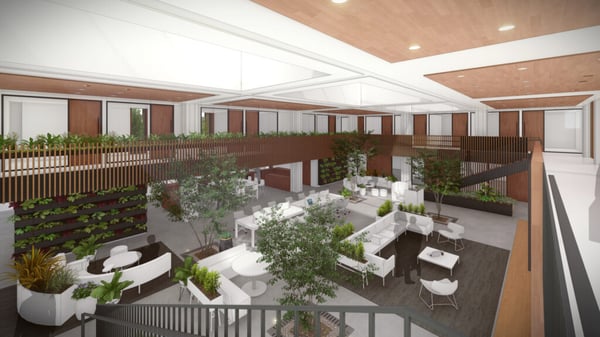 Taking on the LBC

When the Stanley Center decided to build a new facility, they envisioned a building that would embody their mission. With Neumann Monson, they explored several sustainability models, including LEED, and determined that the LBC closely aligned with their values. Unlike other sustainability measures that aim to “do less harm,” the LBC produces a truly restorative building that benefits the planet and the local community.

For Porter, the LBC offers the exciting opportunity to create a building that embodies the Center’s mission. “You rarely receive the opportunity to truly demonstrate your organization’s values in a physical and tangible way,” he says.

The project also offers the opportunity to create a ripple effect and inspire healthy, restorative design. As the first fully-certified Living Building in Iowa, the new facility will be a sustainability trailblazer in the Midwest, an area where extreme temperature fluctuations can make energy efficiency difficult.

By taking on this challenge, the Stanley Center hopes to inspire future developers to pursue similar measures and protect the health of our planet.