Since 1971, the National Organization for Minority Architects (NOMA) has been dedicated to the development and advancement of minority architects. This year, over 1200 professionals and students attended the conference in Nashville, TN, making it the largest conference in NOMA history.

The theme was “Unplugged,” a celebration of in-person connection after years of working and learning online. Someone called the conference a “family reunion,” and by Saturday night, I understood why. NOMA celebrates identity and reminds you that everyone has a place in the industry.

This article will discuss some of my biggest takeaways from the experience.

Giving Back to the Community

Each NOMA conference kicks off with a Legacy Project, an act of community service organized by the host chapter. This year, we worked on a collaborative mural project in North Nashville, the city’s most renowned historically black neighborhood.

A highway has cut off the neighborhood from the rest of the city, and in recent years, residents have faced gentrification. After the city declined a request for a new basketball court in McKissack Park, the NOMA host chapter decided to give it a facelift. Designed by a NOMA member and painted by conference attendees, the mural gives back to and celebrates the host city. 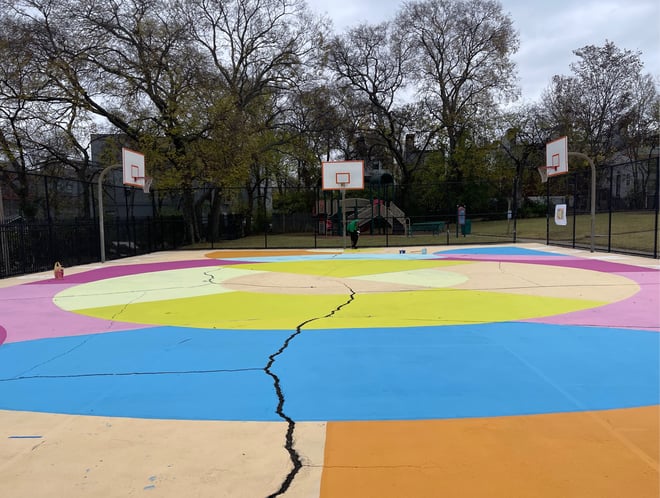 Bringing Voices to the Table

The panel “JEDI (Justice, Equity, Diversity, & Inclusion) Won’t Save You, But Action Will” made a lasting impact. What began as a question-and-answer session turned into an engaging conversation between the panelists and the audience.

We discussed the importance of maintaining your identity while navigating the profession. For me, the most impactful moment was a discussion about racism in the field. As people of color, we are always trying to solve racism, but we cannot solve an issue we cannot control. One panelist made a point that stuck with me—we think we need to show up to the table to discuss equality, but it’s just as important for people of power to come to our table and hear us.

One of the best aspects of NOMA is seeing old friends and colleagues succeeding in the field. On Thursday, we had a small ISU NOMAS reunion. It was the first time ISU NOMAS participated in the competition—and I could not be prouder.

At the Awards Banquet on Friday, we celebrated NOMA members who have accomplished licensure this year. It feels like we are always comparing the low numbers of minority architects in the field, but it is just as important to celebrate successes and inspire younger generations.

The conference also included a keynote from Curt and Jonathan Moody of Moody Nolan. They discussed their journey to become the largest Black-owned firm in the nation, the struggles they’ve overcome, and those they continue to face.

They discussed how they felt the need to pave the way for future Black-owned firms. When asked how it felt to be the best Black-owned firm in the country, they responded, “We don’t see ourselves like that. We just know that we have more work to do.”

At the end of the conference, we had the opportunity to tour of one of Moody Nolan’s Legacy House projects. The house is one of several across the country that the firm designs and donates to a family facing homelessness. The project showcases the impact architects can have on the community and the legacy we can leave.