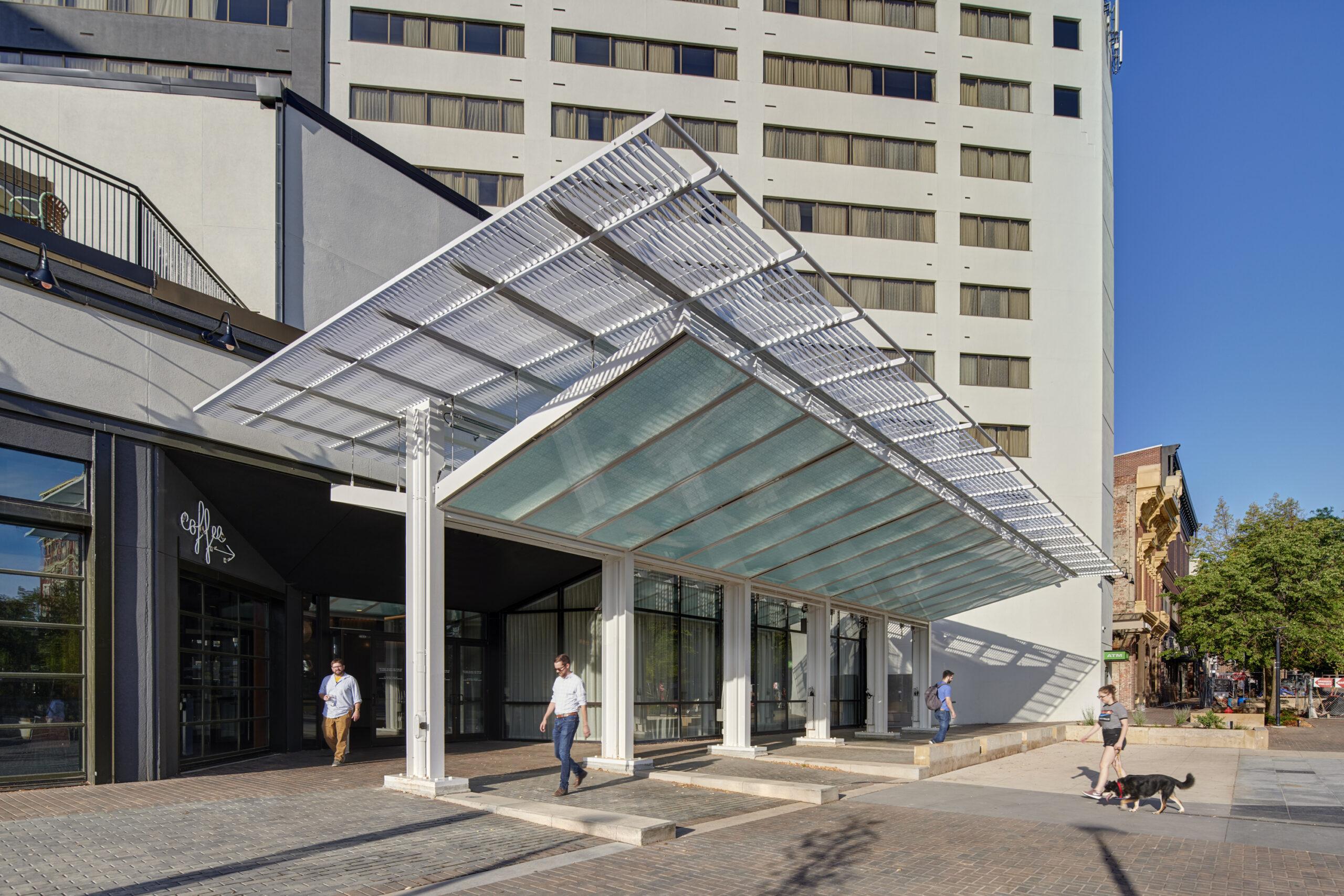 In the late 1970s, life left the streets of downtown Iowa City. Businesses had moved to suburban shopping districts, taking money and pedestrians with them. To reinvigorate its urban core, Iowa City used federal funds to convert portions of Dubuque and College Street into an activated pedestrian plaza, popularly known as the “Ped Mall.” In 1978, the red brick streets of the Ped Mall opened to the public and ushered in a new era of Iowa City’s downtown district.

Throughout the 1970s, many struggling US cities created pedestrian plazas to attract businesses and shoppers to neglected urban areas. Many failed to live up to city planners’ expectations and fell into disrepair. By contrast, Iowa City’s Ped Mall became the heart of downtown, attracting a diverse mix of visitors throughout the day and night.

The Ped Mall’s success can be attributed to the city’s continuous reinvestment in its infrastructure. Weatherdance Stage Canopy, one of the newest additions to the Ped Mall, acts as a central meeting place for entertainers, public speakers, and activists—showcasing architecture’s ability to cultivate community. 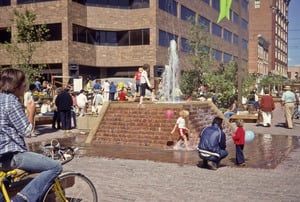 In 2018, the City of Iowa City partnered with Genus Landscape Architects and began infrastructural improvements to the Ped Mall. These improvements were the first major renovations to the Ped Mall since 1999 and included utility upgrades, enhanced lighting, and the addition of fixed seating. As part of this renovation, the city asked Neumann Monson to design a permanent stage canopy outside the Graduate Hotel (formerly the Sheraton), which has anchored the Ped Mall Since 1984.

For years, the elevated area outside the hotel served as an informal stage where performers and speakers could engage the public. Without a covering, performances were often canceled due to inclement weather, pulling visitors away from downtown. The planned canopy formalized the area as a performance venue and protected performers and their equipment.

At Neumann Monson, we worked to elevate the structure into a cultural meeting point. The design team envisioned Weatherdance as the “heart of Iowa City.” Its six steel beams were placed deliberately on-axis to Dubuque Street, one of the main thoroughfares of Iowa City. Connecting to I-80, Dubuque is the main downtown entrance for out-of-town visitors and new University of Iowa students.

In downtown, Dubuque transforms into the Ped Mall with Weatherdance serving as its centerpiece. The stage canopy creates a welcome beacon to anyone arriving downtown. Its glass canopy reflects sunlight during the day, and at night, its LED light display creates a recognizable urban landmark. 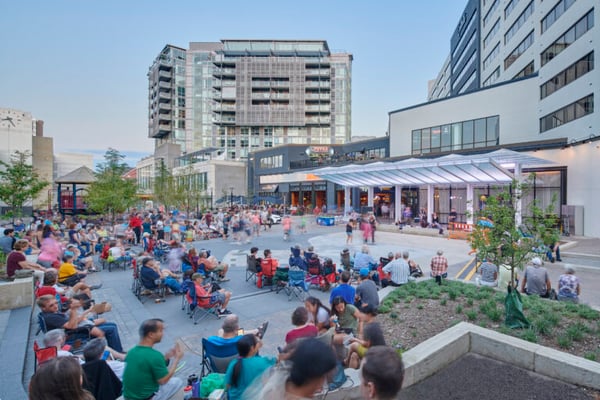 In addition to its symbolic significance, Weatherdance serves the practical purpose of hosting performances and speakers. The structure accommodates anything from spontaneous musical acts to full-scale theatricals. The project team describes the design as “unforgiving.”

Unlike a traditional building, where messy wires hide behind walls, the stage canopy’s technical infrastructure is placed within its thin steel beams. Highly detailed design specifications outlined the placement of each wire and conduit before construction. The result effortlessly supports everything needed for a musical act or public speaking event.

Since its construction, Weatherdance has served musical artists, public speakers, and community organizers. Political rallies for presidential candidates have occurred below its canopy, and it has also served as a gathering point for protests.

Iowa City Downtown District Executive Director Nancy Bird describes the stage canopy as “the city’s contribution to the event producers of Iowa City.” By providing the technical infrastructure for events and performances, local artists can continue to cultivate a true sense of place and enliven the city’s culture. In 2021, the Weatherdance Stage Canopy will be a central spot for Iowa City’s Summer of the Arts festival.

Weatherdance highlights the importance of community-centered architecture. Nancy Bird says the canopy is integral to Iowa City’s Downtown District’s goal of placemaking. It provides a space for people to gather, experience new interactions, and form connections. Each day, Iowa City’s Ped Mall brings together a diverse array of visitors and strengthens the community. With the addition of Weatherdance, the Ped Mall can continue to cultivate community for years to come.