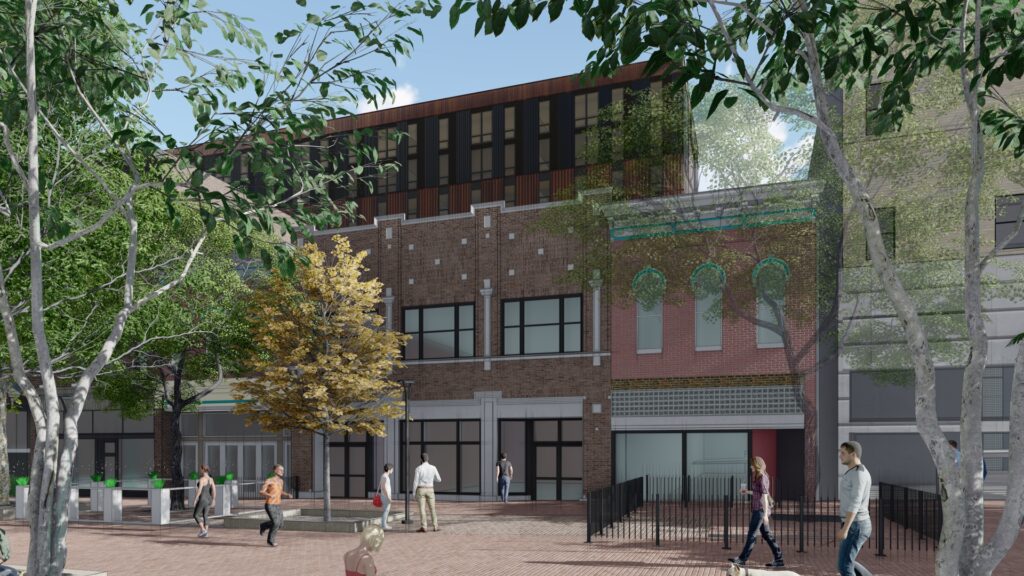 Iowa City’s urban renewal project was met with controversy. Although the project led to popular downtown features like the Ped Mall, it also stripped downtown of some of its most historic and iconic structures. Today, we must preserve Iowa City’s character by protecting the few historic buildings that remain.

Headquartered in Mankato, Minnesota, Tailwind Group specializes in commercial, retail, and residential real-estate development. In 2017, they partnered with Neumann Monson after acquiring the Crescent Building on East College Street, one of the Ped Mall’s main thoroughfares. We recommended Tailwind purchase the surrounding properties to maximize the redevelopment potential.

The five historic buildings have been granted local historic landmark status, saving them from future demolition. Non-original additions on the alley side have been removed to make way for residential development. Originally, the alley served as a space for carriages, but in the mid-20th century, department stores expanded into the alley to increase their retail space.

A 102-unit apartment complex—known as the Nest—will stand in the additions’ place. The design team gave special attention to the Nest’s height and materials, creating a contemporary building that is sympathetic to downtown’s historic fabric. 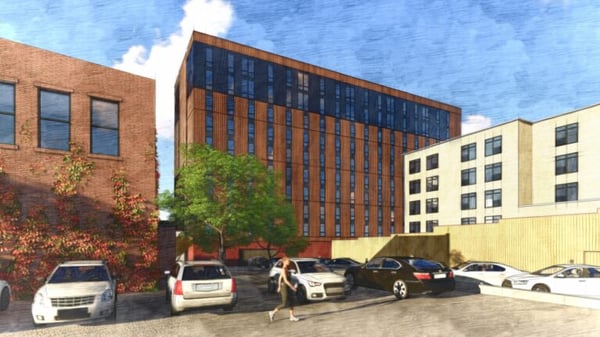 The Nest as seen from E. Burlington Street.

East College Street’s Past and Future

For the five original buildings, historic landmark status is well-deserved. Each building has a rich history that adds to Iowa City’s legacy.

The College Block Building, the oldest of the five, has enjoyed landmark status since 1973. Designed by Chauncy Lovelace in the 1880s, the building features an eclectic mix of Italianate and Queen Anne architectural styles. Younger residents may remember the building as Martini’s bar. Others may remember it as the home of Bushnell’s Turtle, a beloved Iowa City deli that opened in 1976.

After the renovation, the College Block building will serve as a restaurant space once again, adding new downtown dining options.

The second building in the block, the Crescent Building, dates to 1894. Most recently home to Union Bar, the Crescent Building housed the Montgomery-Ward department store for the first half of the 20th century. In the 1970s, the building took a counter-cultural turn when it transformed into the River City Free Trade Zone, a market for books, records, antiques, and clothing. Its laid-back atmosphere epitomized the spirit of the times. Stalls closed at their owners’ whim, and one stall even served as a “free store” where passersby could drop off and pick up items without paying. 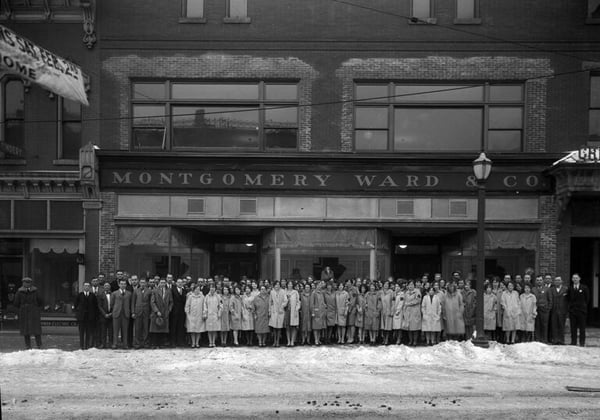 Montgomery Ward employees outside the Crescent Building, circa 1920s.

The last group of buildings, known as the Dooley Block, was built in 1895. In the 1920s, the Dooley Block became home to Sears-Roebuck, which competed with Montgomery-Ward next door. Recently, the Dooley Block has been home to Graze, Field House, and El Patron Mexican Restaurant. Neumann Monson even had an office above Field House between 1990-2006.

After construction, Reunion Brewery will create a restaurant and bar space on the top and bottom floors, activating the Ped Mall throughout the day and night.

Historic preservation and new development are often framed as opponents. Preservations want to maintain the city’s character, while developers want to encourage new economic opportunities. Iowa City’s downtown is a microcosm of this struggle.

Tailwind’s East College Street project demonstrates that the old and new can exist coexist—and at Neumann Monson, we are thrilled to see this ideal become reality. This project should serve as an important reminder: as we build Iowa City’s future, we must remember to honor its past.